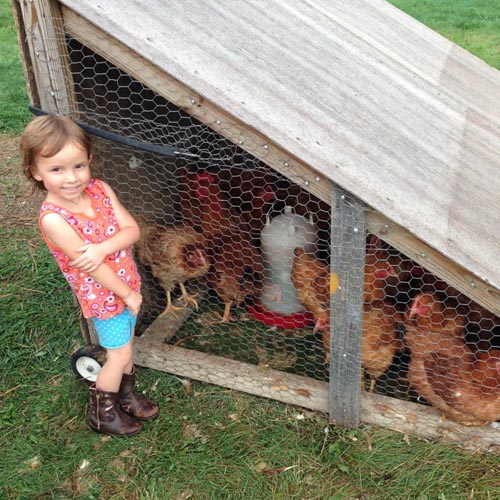 We raise several batches of broilers or “meat birds” throughout the summer. We regularly receive rave reviews for the taste and juiciness of our chickens’ meat. Sarah raises the traditional white Cornish cross broilers as well as a reddish breed called “Freedom Ranger”. The Cornish cross broilers grow rapidly and are type of chicken you’ll see at a grocery store. The Freedom Rangers were originally developed in France under their “Label Rouge” guidelines for humane meat production. These birds were originally bred to be raised on pasture, making for a breed that are great foragers. They tend to have less white meat and more dark meat than you’ll see with the Cornish crosses. In addition to their foraging, they eat grain-based feed that we get from the Dexter Mill.

Although they love sitting by their feeders all day, our meat birds have free range of the farm. At night they go into their chicken tractors (see the picture with Ruth) for protection and we move these around the farm. We’ve found that although the ground isn’t pretty after we move the tractors, within weeks the grass grows in more lush and darker than it was before. These birds take 8 (Cornish cross) or 12 weeks (Freedom Rangers) to grow to a final weight of 6-7 lbs.